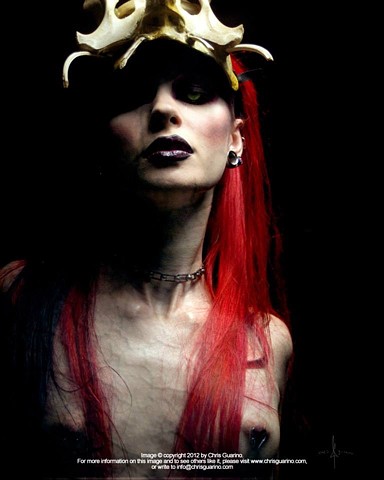 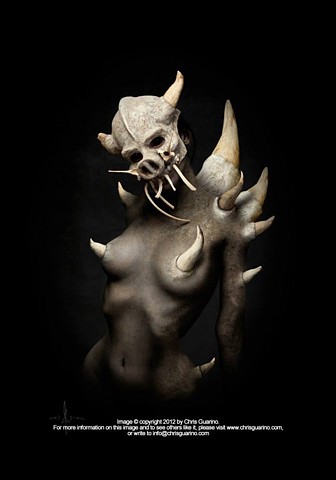 Born in a small town on the outskirts of Chicago, Chris Guarino grew up drawing, playing in the ruins of old factories, and exploring the sewers and storm drains near his home. Years later, Chris began to show his work in Chicago, making a name for himself in the art community in Bucktown and Wicker Park. He became a resident artist at The Aesthetic Eye Gallery in 2001, where his work was shown and sold on a monthly basis. Longing to see what the world had to offer him, Chris traveled to London when he was nineteen and began working in a bronze foundry part-time, and showing his work around Camden Town where he lived for four years. London changed Chris in ways he cannot quite put into words, except to say that the age and immense history of the place and it's many graveyards and old churches haunt him in a way nothing else has. Seeking yet another change, Chris moved back to the States in 2005. This time to the historic Capital Hill neighborhood of Denver, CO. There he joined up with several galleries, learned to weld, and perfected his life casting and sculpting talents under his mentor David Parvin. Since then he has participated in countless group and solo shows in Denver, Chicago, San Francisco, and was most recently invited to show his work at Strychnin Gallery in Berlin Germany. As a Special Effects Artist, his work can be seen in the films “Ink” (prosthetic sculpture for the main character), “The Enemy God” (prop design and fabrication) and the upcoming “Decay” (SFX makeup design and application, and set and prop design), as well as in the traveling “Squirm Burpee Circus,” where he works on prop design and building. Now an international artist, Chris's work has appeared in several art publications including being named 5280 Magazine's Reader's Choice for Top Local Artist, and the fantasy art publication "Spectrum 18." Chris has now in Austin TX. where he lives and works out of his home studio as a sculptor, life caster, and gets involved in any artistic project he can get his hands on.