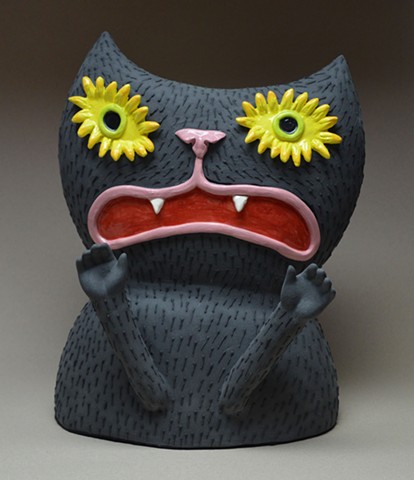 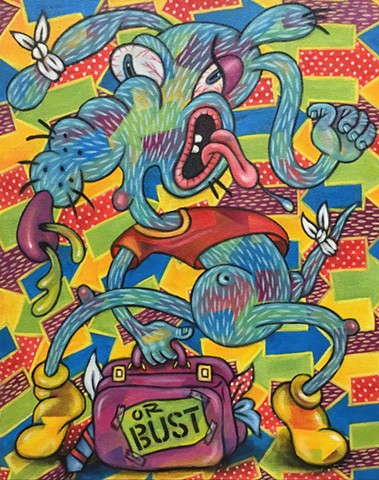 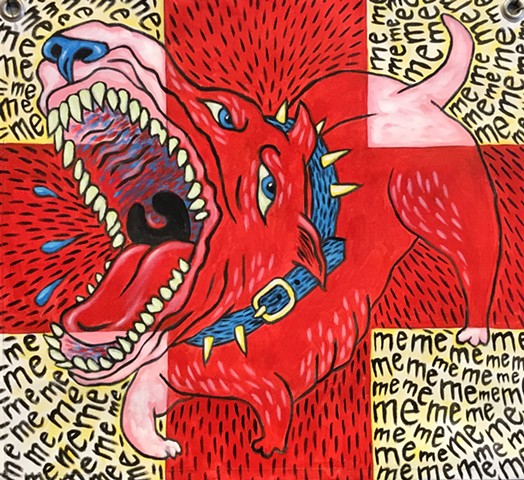 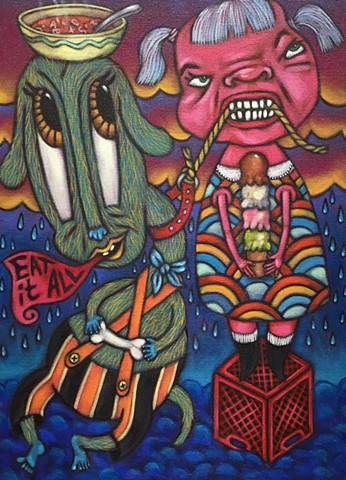 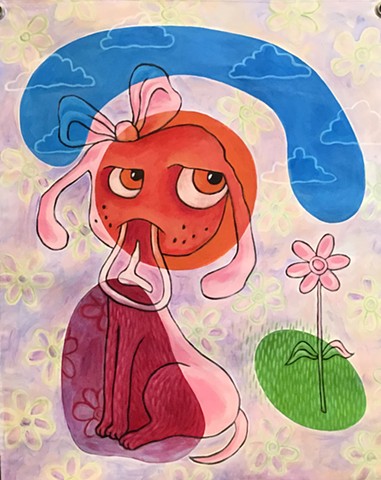 My work is narrative in nature, and simply put, contains allegories of workaday life and global strife. Sure that may sound dire and dismal, but my objects and images are always flamboyantly colored and packed with cartoonish humor. My never-ending cast of characters are both familiar and fantastic, sometimes bordering on the grotesque but always weirdly funny and beautifully executed.

By giving equal importance to topics domestically mundane and internationally tragic, I cheerfully explore the blurry space between the personal and political. The aim of my visual explorations is to create multiple avenues of questions rather than one dead-end answer. I aspire to create a sort of visual itch that will linger like a puzzle left unsolved. Tucked between my rather whimsical creatures I scoop out brightly colored dollops of intrigue and ambiguity to serve as an invitation to fill in the narrative blanks and thus allow the viewer to relate personally to the piece and vice versa.

Opportunity exists in the act of art making to create a pleasurable anxiety through the narrative presented, but more importantly, in the manner that the story is told. Composition and color urge me to take full advantage of their potential through balance, discord and repetition. In my work, for every action there is a reaction or rebuke, for every blue there is an orange or green, for every shape there is it's echo and void. I work on these aesthetic aspects of my paintings rather intuitively, keeping at it until the canvas feels like the controlled explosion of design and color that best expresses the tenor I am aiming for.

Biography: Born and raised in Sarasota, Florida, my formative years were steeped in the cheerfully low and tastelessly high of American culture; the usual Florida kitsch and kin. From retired circus performers and aging munchkins, to wealthy blue haired dowagers with their dyed-to-match poodles, I found many characters worthy of note, and saw in circus magnate John Ringlings' marvelous collection of theatrical paintings how art could both amaze and amuse. Declaring myself an artist at age three, I attended pro-wrestling matches and watched the greyhounds chase the mechanical rabbit in practice runs at the dog track. I recited the Brownie Promise at a neighbor's modest ranch house and was bused to classes at a special campus set aside for gifted students, eventually leaving Florida and completing my liberal arts education by graduating cum laude from Mt. Holyoke College in S. Hadley, Massachusetts. During the 1980's I stubbornly produced works in many different styles and materials despite a couple of moves to the U.K. and a few years criss-crossing the U.S. in a Datsun.

In 1992 I began painting in earnest in acrylic on canvas. At present count I have produced well over 300 paintings, mountains of sculptures in both papier mache and clay, two sci fi novels, and a couple of wonderful children. My studio and I live on a 5 acre compound of dead cars, broken appliances, and old trailers in the New Mexico desert.