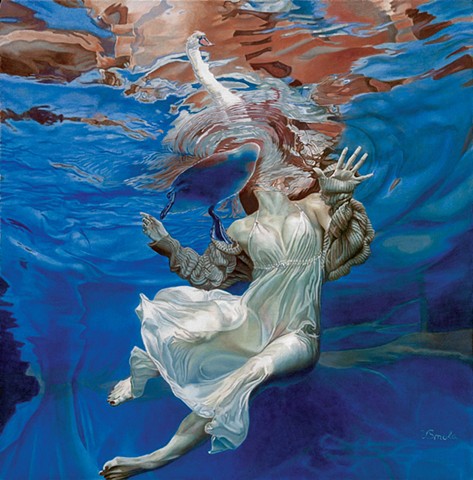 In the Greek mythology, the god Zeus is relentless in his amorous pursuits of women. One of his conquests - and victims - is a mortal Leda whom he seduces or rapes while being disguised as a swan. Traditionally, the existing art portrays Zeus and Leda in twisted poses embracing or making love. "Leda Relentless" is a different interpretation of the Myth. Leda refuses to be victimized by the all-powerful God and instead challenges his dogged macho ways. However, nobody denies his advances unpunished. The escape may lead to a bloody battle and even her demise. The painting shows the two characters in the middle of the pursuit with Leda's blood spreading across the lake where she's taken refuge from Zeus.